Robert Sheckley, a writer of science fiction whose disarmingly playful stories pack a nihilistic subtext, died yesterday in Poughkeepsie. He was 77 and lived in Red Hook, N.Y.

The cause was complications of a brain aneurysm, said his former wife, Ziva Kwitney. Mr. Sheckley wrote more than 15 novels and around 400 short stories; the actual total is uncertain since he was so prolific in his heyday, the 1950's and 60's, that magazine editors insisted he publish some stories under pseudonyms to avoid having his byline appear more than once in an issue.

Four of his stories were made into films; the best known, "The Tenth Victim" (1965), starred Marcello Mastroianni and Ursula Andress.

Born in Brooklyn and raised in Maplewood, N.J., Robert Sheckley joined the Army in 1946 after graduating from high school, and served in Korea. In 1951 he received an undergraduate degree from New York University and sold his first short story.

Over the next two decades, he was a major force in the development of modern science fiction. His first collection of stories, published in 1954, was hailed as one of the finest debut volumes in the field. In the 1960's he found a wider market for his science fiction in magazines like Playboy.

Many of his novels were well received, among them "Journey Beyond Tomorrow"(1962) and "Dimension of Miracles" (1968), but Mr. Sheckley was best known for his short stories. At a time when science fiction was just starting to grapple with the social implications of technology - from atomic bombs to missile-carrying rockets - Mr. Sheckley turned a satirist's eye on the genre and its concerns.

Like Ray Bradbury, he was interested in the scientific apparatus of science fiction - space travel, time travel, extrapolated futures - only so far as it served his purpose. While Mr. Bradbury poetically mourns the failure to live up to our dreams of the future, Mr. Sheckley mocked the self-delusions that lead to dreams in the first place.

He reveled in the freedom the genre afforded him to dramatize the fears and anxieties of everyday life. When he wrote about the war between the sexes, he conjured a future in which disappointed lovers had the legal option of using real bullets to express their anger. When he wrote about alienation as a state of mind, he sealed the reader in an endless loop of disaffection that reduced the outside world to a hallucination wrapped in an illusion.

Because he leavened his darkest visions with wit and absurdist plotting, he is considered one of science fiction's seminal humorists, and a precursor to Douglas Adams, whose "Hitchhiker's Guide to the Galaxy" (1979) seems to take place in a Sheckleyan universe. But Mr. Sheckley's work is darker than Mr. Adams's; the smiles he evokes leave a bitter taste on the lips. A better comparison might be to Kafka, a fabulist who could never understood why his friends didn't laugh when he read his stories to them.

Mr. Sheckley's marriages to his first four wives, Barbara Scadron, Ms. Kwitney, Abby Schulman and Jay Rothbell, ended in divorce. At the time of his death he was separated from his fifth wife, Gail Dana. Other survivors include a son, Jason, from his first marriage, a daughter, Alisa Kwitney, from his second marriage; a daughter, Anya, and a son, Jed, from his third marriage; his sister Joan Klein of New York; and three grandchildren. 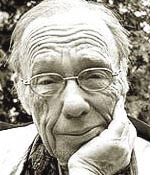